After hearing strange noises coming from their kitchen, an Australian family found themselves face on with a snake on Monday.

In Peregian Springs, a suburb located in the Sunshine Coast Region of Queensland, the residents of a home had to call upon a local reptile catcher for assistance.  After hearing something strange in the way of noises coming from the kitchen, upon further investigation discovered a rather lengthy carpet python.

The residents made a call, and Matt, an expert snake wrangler, representing Sunshine Coast Snake Catchers 24/7, showed up at the home a little after 1 am in the morning.

The homeowners, who were not identified, stated that they had been woken up when they hear several items knocked off what sounded like the table in their kitchen.  When they went to investigate, it was then that they learned a rather large constrictor snake had somehow gotten into the home. 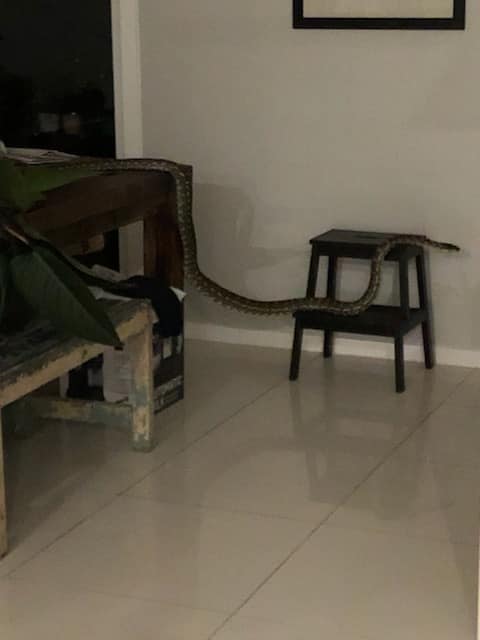 “Wowzas!  Imagine getting woken up at 1 am to noises coming from your kitchen area.  This is what happened to a family in Peregian Springs this morning when they heard objects being knocked off the dining table.  Luckily, it was just a harmless intruder who had simply got lost and made its way into the house.”

The snake was confirmed as not being venomous, but one that kills by way of coiling around its prey and suffocating it.  Like the one mentioned here, Carpet pythons are common and widespread in the northern, eastern, and southern regions of Australia.

Carpet pythons are most commonly active during both the day and the night.  They typically feed on frogs, lizards, birds, and some mammals such as rodents and opossums.