What initially began as nothing more than a joke eventually segued into a Star Wars Easter egg within the cult series Firefly.  Many may wonder why, and what, the Western series set in space borrowed from another well-loved space franchise—we are going to answer that question right now!

Firefly was a short-lived space Western series that drew its tone and inspiration from another similar space franchise—Star Wars.  As such, it has come to light that the series had a particular Easter egg from the Star Wars franchise hidden in plain sight in several of its episodes.

Firefly debuted on the then Fox network in 2002 created by Joss Whedon—known for his work on Buffy The Vampire Slayer and within the MCU.  The series only lasted for fourteen episodes, all of which were not originally aired before its cancellation.

Firefly explores the lives of its nine main characters, set in the year 2517, in a society combined under a Chinese-American government that exerts absolute authority known as the Alliance.  The series succeeded masterfully in blending both the Western and space opera genres, which aided in its love by the fans. 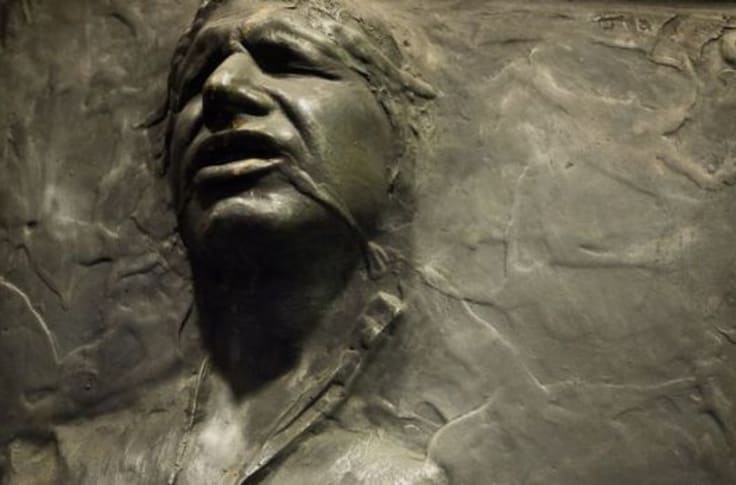 Since the Star Wars movies inspired Firefly, it seemed only fitting that the show paid some form of homage in respect.  This showing of respect resulted in the placement of a Star Wars Easter egg in the background of several episodes in the series.  The item was a miniature replica of Han Solo’s character as he appeared frozen in carbonite towards the end of the sequel The Empire Strikes Back.

This same replica appears in several episodes, such as next to the character of Kaylee, sitting in her hammock, in the episode “The Message.”  It also pops up on a shelf above a bartender in the episode “Jaynestown.”  Rumors to this day say that fans can see the Han replica in the background of just about every Firefly episode.