If you are a subscriber to Amazon Prime, then your fall TV is going to get a little more super.  On Friday, September 4th, Season 2 of the gritty satire, The Boys, will premiere with three episodes back to back.

The announcement was made by the newest guest star, Patton Oswalt, at a recent virtual reunion panel.  After the initial premiere night, a new episode will debut each Friday until the season wraps up with its finale on October 9th.

When last we saw The Boys, they had found themselves on the wrong side of the law, being hunted by the Supes, and in the grips of trying to regroup the team and further their fight against Vought.  With members of the group in hiding, including Hughie, Mother’s Milk, Kimiko, and Frenchie, who are working to adjust to what is the new normal, Butcher is nowhere to be seen.

While over on the, what may be called a superhero, front Starlight finds herself attempting to find her place within the Seven, as her fellow teammate Homelander has his sights set on taking over complete control. 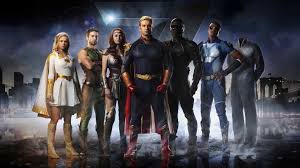 However, he finds that he has a challenger in the newest member Stormfront.  Being a savvy supe in the area of social media, it seems Stormfront has her own agenda in place.  As if that isn’t enough, Vought is working to capitalize on the nation’s wave of current paranoia, only serving to put the Supervillian threat at center stage.

As for the remainder of the Seven, they include Queen Maeve, A-Train, The Deep and Black Noir.  In upcoming episodes this season, we will be introduced to Alistair Adana, portrayed by Goran Visnjic.  Adana is the charismatic leader of a somewhat shady church.  And Victoria Neuman, portrayed by Claudia Doumit, who is a congresswoman in Washington.