Ever since the advent of popular social media sites such as Facebook and Twitter, the pop culture community has used the opportunity to make their voices heard.  This is most true when a fan-favorite film or television series is canceled, altered, or just messed with.

One such widely known case is that of Justice League a few years back.  When the film, which as already in production, lost its director, Zach Snyder, Joss Whedon took the reigns and finished the film.  However, it wasn’t long after the film’s release that fans started clamoring for the cut that Snyder would have produced.

Now, after years of the movement #ReleaseTheSnyderCut has been circulating on the social media site, Warner Brothers finally gave in and announced that the fans would get what they were asking for.  The Snyder Cut is due to hit HBO Max in 2021.

Now the fans of the Netflix Marvel-based series, Daredevil, are hoping that the same maneuver will work for them.  They have taken to Twitter in the hopes of their #SaveDaredevil movement to have the same happy ending as the Snyder Cut. 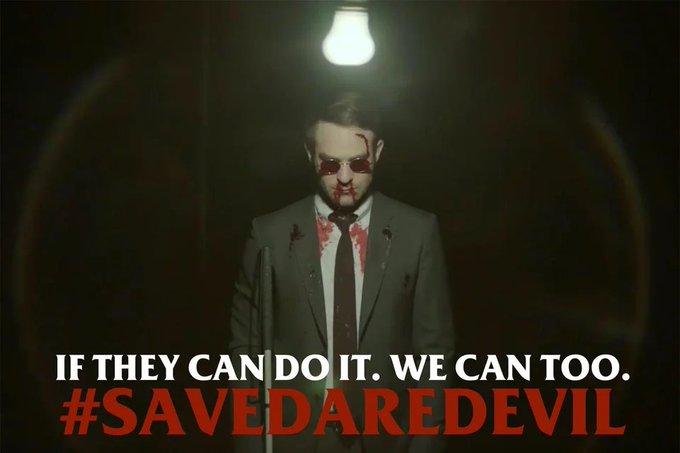 The campaign, which is supported by the simple hashtag #SaveDaredevil, is hoping to rally support for one of the first of many Netflix television shows based on popular Marvel characters.  Daredevil was canceled after only three short seasons, but those followers of the series are determined that this is not the end.

In the multitude of posts filling up the Twitter feeds, one stands out that pretty much sets the tone of the campaign:

“Fans have helped get Clone Wars back on #DisneyPlus, improved CGI with #SonicTheHedgehog, a new #StarTrek series with Captain Pike, and now a #JusticLeagueSnyderCut.  All we need to do to complete the cycle is to #SaveDaredevil.”