After a family outing in 2019, Raegan Richins and her sister, Rylyn, drove along a country road in Kentucky looking for yard signs reading “Just Be Kind.”

The signs struck a nerve with the two girls, who have two sisters with Down Syndrome.

Raegan tells PEOPLE, “We have siblings with special needs, and we both felt that people sometimes weren’t as kind to them as they should be.” 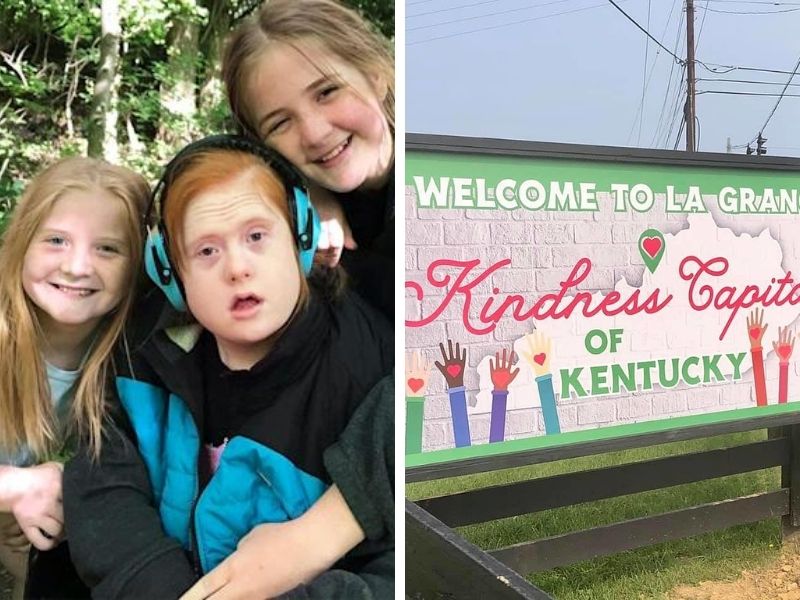 Soon after returning home, the sisters created their colorful yard signs – bearing the message “Be Kind” – that reached thousands in La Grange and beyond.

Raegan and Rylyn, 10, paint and create colorful signs in their backyard, selling them for $10 to benefit local charities.

More than 3,000 signs were sold, raising more than $40,000 for the Humane Society, food pantries, and other charities.

Their creations adorn countless shop windows and front yards all over the neighborhood, encouraging folks to think of those less fortunate.

Rylyn says, ” “Kindness makes the world a better place,” says the girls, who are still amazed at their city’s designation as “Kentucky’s kindness capital” because of their yard signs.”

Raegan adds, “A small act of kindness can mean a lot. A simple act like holding the door open makes a person feel good like I do at school.”

As children, the sisters learned that helping others was a virtue from their parents, who adopted two children with Down syndrome after their brother Kallen died young of the disorder.

Their campaign earned them a spot on the Today show, their message appeared on a giant video billboard over Times Square, and now they will be appearing in an HGTV series.

Raegan says, “I can’t tell you how many of our signs we see each day. But every time we see one, it makes us happy because we know we’re spreading kindness.”

Home Town Kickstart Presented by PEOPLE, a new HGTV series honoring those who make a positive difference in their small towns, features the duo.

You can watch Love for La Grange on May 15, 8 p.m. ET on HGTV and streams on discovery+.