Undoubtedly, one of the most anticipated Marvel series yet to appear on Disney+ is that of Hawkeye.  With the film having recently completed filming and shooting wrapped, fans have seen little information about the plotline or even an official first look.

However, that doesn’t mean that there haven’t been postings showing behind-the-scenes images from the production.  These include a photo featuring Jeremy Renner, the actor set to portray Hawkeye, as he shows off his character’s costume—which, as it would happen, is rather comic book accurate.

There is no denying that Marvel has leaned away from their screen versions of their superhero characters through the years, resembling their comic book versions.  However, with the offering of the photo of Renner from Hawkeye, it appears that the studio is beginning to change their mind and their ways. 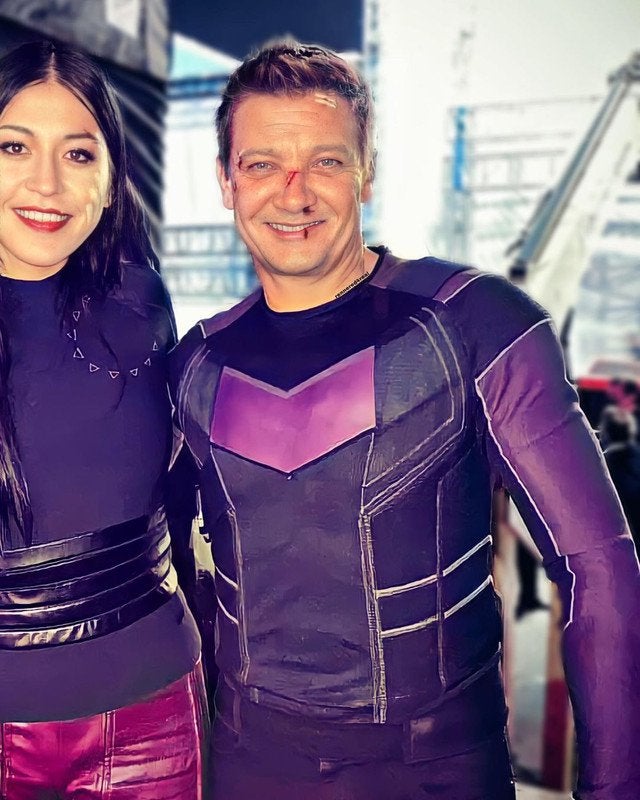 What does this mean in the short run?  It means that when the fans finally can view Renner’s series, Hawkeye, they will see the character in purple just he has been in the comic book for years.  Many feel that this will be a nice change from Hawkeye’s previous all-black look, and it will add a little extra specialness to the Disney+ series for fans and viewers.

In the same photo, Renner is seen standing alongside the actress, Alaqua Cox, who will be portraying Maya Lopez (aka Echo) in the series.  Fans can see that this character’s costume is somewhat comic accurate as well.

Where the behind the scenes photos came from is still a mystery.  We can only hope that more information and photos are on the way shortly.  Now that filming has wrapped, it is hoped that Marvel will tease us with official images from the series itself in the coming months.

Hawkeye is currently scheduled to stream on Disney+ later in 2021.