Antonio Brown walked away from the field as she was frustrated and angry.

Antonio has kicked off the Buccaneers after the shirtless exit from the field. Later on, Tom Brady led the team to victory over the New York Jets on Sunday. Buccaneers won 28-24 in the final minutes on a 93-yard drive. 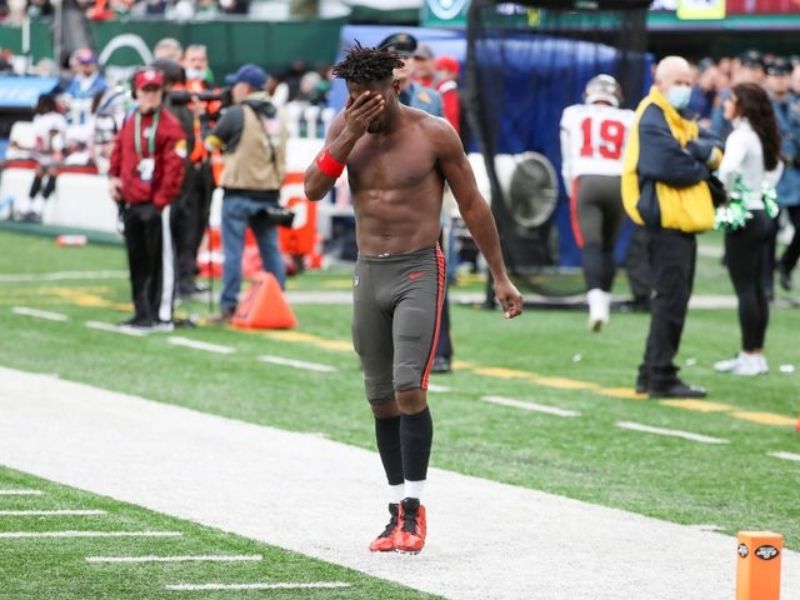 Bruce Arians said Antonio was off the team after the game.

Arians said, “He is no longer a Buc. All right? That is the end of the story. Let’s talk about the guys who went out there and won the game.”

Antonio fell halfway through the game near the end of the third quarter, with Tampa Bay behind 24-10. He appeared animated during a discussion with Mike Evans, who tried to calm down his teammate. But Antonio stripped off his pads, jersey, gloves, and T-shirt. He tossed the gloves and T-shirt into the stands and walked bare-chested into the end zone. He greeted the fans by jogging through the end zone and tunnel to MetLife Stadium.

It seems like he is frustrated, who had three catches for 26 yards.

Arians said, “I am not talking about it. He is not a part of the Bucs.”

Antonio was suspended last month for three games to violate the protocols concerning COVID-19. There is also a history of personal conduct and bizarre behavior.

Brady said, “It is a difficult situation. Everybody should do what they can to help him in the ways he needs it. We all love him. We care about him deeply. We want to see him be at his best. Unfortunately, it won’t be with our team. I think everyone should be very compassionate and empathetic toward some tough things that are happening.”

Arians said, “We have been in some crazy situations before, but this was an exceptional one to come back and win that game.”