Sloths have reunited with their families at the St. Augustine Alligator Farm Zoological Park!

On May 10, a video from the Florida zoo’s YouTube page shows Hoffman’s two-toed sloth’s mother, Grizzy, crawling towards her mate, Teddy, while their baby crawls towards her stomach.

At this point, Teddy meets his baby for the first time. 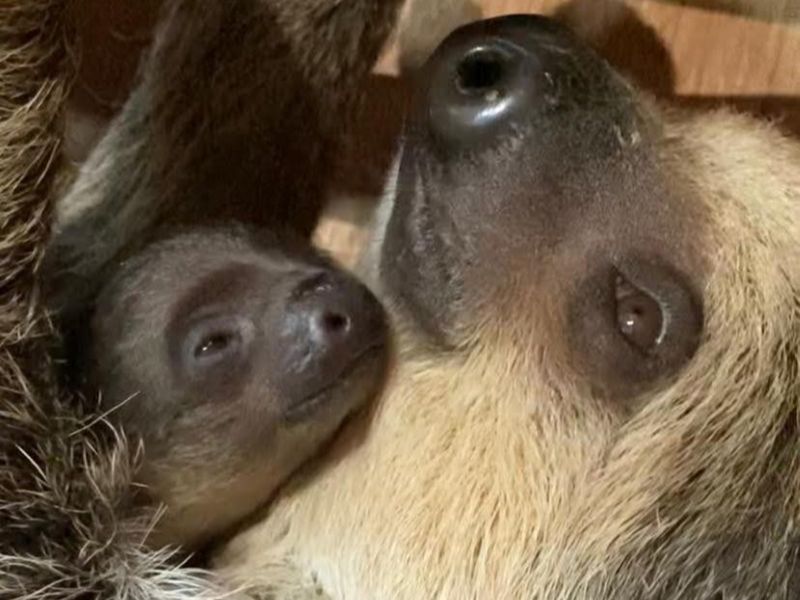 Grizzly and the newborn rested and bonded in the maternity ward before this introduction to imitate a sloth’s natural postpartum routine.

The clip shows Teddy hanging from a tree when Grizzly and their newborn approach.

While they make their way through the tree, the baby is safely nestled under its mother.

Baby Teddy leans up to his father and sniffs him as soon as its mother and father reach Teddy.

The zoo’s bird and mammal curator captured a video of Hoffman’s two-toed sloth tending to its newborns on March 24 and posted it to its Facebook page.

The video shows wild sloth moms “kick out the dad” for their young and continue to care for them alone.

An employee of the zoo commented that Teddy and Grizzly are a unique couple because they live together.

The zoo curator said, “But since that is how they’ve elected to, we felt it was imperative to keep them here that way. Mom and baby need time to bond, and Teddy, very smartly, decided to give them some space.”

Teddy had been separated from Grizzly since she gave birth to the baby sloth in February, so she had several months alone with the newborn.

To ensure that the three go along nicely, the St. Augustine Alligator Farm Zoological Park staff will continue monitoring them.

In the current situation, all three animals are happy to live together at the zoo’s Sloth Landing.